Notes on the keyboard 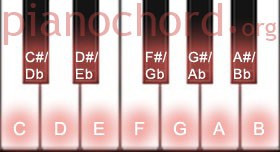 The picture illustrates how keys and notes are related. This pattern of twelve notes is repeated all over the keyboard. Choose from the menu above to get piano chords for a specific note.

As you can see in the diagram above, there are both white and black keys on the keyboard. The white keys are C - D - E - F - G - A - B. After the B it starts again on the next octave following the same order. (It can be noted that in some countries the letter H has been used instead for the letter B, so if you happen to see chord names like “H”, “Hm”, “Hmaj7” and “Hsus” you know why.)

The names on the black keys may be somewhat confusing. The black key with the notes C# (C sharp) and Db (D flat) is the same note, but the names shifts depending on which scale or key they belong to.

Between E and F as well as between B and C black keys are “missing”. It just doesn’t exist an E# or an Fb, neither does a B# nor a Cb exist.

Chords in different positions on the keyboard

We have concluded that the same note occurs in several positions over the keyboard. So is there any right position to put down your fingers playing a specific chord? The answer is that there is no single right position. You can play the chord where it sounds best. On the left part of the keyboard are the low-pitched keys located and the sound therefore includes lots of bass. And in the opposite direction, on the right part of the keyboard you find the high-pitched keys that produce sounds with more treble.