How to combine piano chords

As soon as you have learned chords, you want to combine them in a way that creates music. The guitar may be the ultimate chord instrument in the way the chords by themselves make great music. A piano player will in many cases add some melody notes to the harmony created by the chords.

Nevertheless, you must learn how to combine chords to create an appealing harmony on your piano. And there is some know-how for this.

If you shift from one chord to another at random, you will now and when experience dissonance. So how to avoid dissonance? Stay in the same key is the simple answer. The table below gives you the guidelines.

The table tells you, for example, that you can combine the chords C, Dm, Em, F, G, Am and Bdim in all possible ways … and it will not be any disharmony.

You may wonder about the Roman numerals in the table above. These are used to generalize sequences of chords, to describe a structure instead of a specific chord progression. For example, I - ii - iii is the same as C - Dm - Em or D - Em - F#m. Big letters (e.g. "I") represents major and small letters (e.g. "i") represents minor.

The table above serves you a foundation for tons of possible chord arrangements. By utilizing only a few of the keys and choose from the chords that belongs to them should give you thousands of possibilities. Here are some ideas of chord progression created by using Table 1:

If you are not satisfied and want further enhancement just continue reading.

Transpose to other keys

Sometimes you want to change key, but keep the relative intervals between the chords. The table below show transpositions for all keys.

So how do you use the table? If you have the progression D - G - A - D and want to play the “same” progression in the key of Eb you exchange all the chords to the ones that could be found on the row below (or the column to the right), and you will get the progression Eb - Ab - Bb - Eb.

You should combine both major and minor chords, this is a mix that enriches the music. Sometimes you could stick to only major or minor chords, but it will often be monotonic in longer sequences.

The table above focus on major keys with a major chord as the first chord a sequence (or at least working as the tonal center). It is, however, possible to start a progression with a minor chord (or use it as the tonal center), which the table the below show.

The Am chord is the minor relative to the C major chord. So, for example, you could start with Am and create progressions with the chords in the key of C.

The minor keys are relative to the major keys and therefore using the same chords.

Sometimes lesser notes will make it sound better. In pop music, for example, you often decrease your tone pattern to only five.

You could try this by improvise using the tones c, d, e, g and a over the chords C, F, G, Em and Am. It will give you a sound that resemble more to pop than traditional melodies.

The table tells you, for example, that you can combine the chords C, Em, F, G and Am in all possible ways.

When chords that don't match are played together dissonance (in music it means lack of harmony among notes) occur. Yet, dissonance must not be avoided in all situations. A little bit dissonance can surprise the ear and make a chord change more interesting. Chord changes between chords with no key related chords tend to sound bad, but if the chords partly shares the same notes of the key, it is another thing.

The following two progressions include chords outside the relevant C major key (E / E7), but still sounds great despite there is some dissonance:

So far, we have only talked about the basic chords, including three notes (triads). There are many more possibilities and you may already be familiar with chord names like Cmaj7, F9, Gadd2 and so forth. Instead of playing a sequence like C, F, G you could, for example, alternate with Cmaj7, Fmaj7, G7.

There is some know-how concerning which chords that are best suited for being extended depending on the key the chord sequence is derived from. In general, the key chord is often best to keep as a triad, but not always which the following examples will show.

Another thing to know about is that some extended chords are especially appropriate in certain music styles. A very common progression in jazz, for example, is: iim7, V7, Imaj7.

If you are confused by the Roman numerals iim7, V7, Imaj7 is the same as for example Dm7, G7, Cmaj. Extended chords are very common in jazz and if you want supplementary information, see for example this list with ten popular jazz chord progressions.

There are also lots of extended chords in blues, although not as many chord types as in jazz, generally speaking.

12-bar blues and 16-bar blues progressions are very standard in blues and concerning chords the most fundamental to learn. A 12-bar progression is, just like the name says, a sequence consisting of 12 bars. The most common structure includes three chords and can look something like: I, IV, I, V, IV, I. If you are interested about learning more about blues progressions, here you find examples including videos and soundtracks.

Extended chords are used in several other music styles, like different Latin styles and in pop music. But instead of going deep into music styles, we are returning to the main subject and continues with ways that can serve you then looking for different ways to combine chords.

One way to create lovely movements and moods in music is to apply descending and ascending bass lines. The bass note in a chord is the same as the root, in other words the lowest note. Therefore, a bass line is created with the lowest part of the chord which through chord changes creates a bass line.

We could proceed from the bass line c, b, a, g and build a chord progression that uses that bass tones. One example of such a progression could be: C, G/B, Am, Am/G. (G/B and Am/G are so-called inverted chords and you could find diagrams of these on the site.) Here is another example of a progression with a descending bass line: G, G/F#, Em, Em/D, C.

A nearby subject to descending and ascending bass line is bass walks. Instead of playing a whole chord you could choose to only play the bass notes and after that change chord. An example could be: G, f#, Em, d, C (small letters indicating only a note).

Two ways in how a chord progression can be used as an outro:

It is common to modulate the IV chord from its regular major to minor like in these examples.

The last part of this introduction of ways to combine chords to another are the most theoretical. You don’t necessarily need to know this if you by intuition can get a feel of it; otherwise, it could serve as a handy guideline.

The resolution is stronger between some chords than others. By this means how stable the chord sounds. Compare the following two sequences:

Doesn’t it sound like the first progression end on a stable chord whereas the second end on a chord that seems to want resolve into another? If we add a C after the G7 it will sound stable, right?

This is because some chords in the context of a key appear slightly different in this aspect. Compare these two sequences:

Even if the second progression doesn't create any dissonance, it feels a little abrupt at the end. In the first progression, on the other hand, the end sound very natural. The reason is that in the key of C major the G major chord resolves naturally into the C major chord.

The same relationship is true for all keys, so with Roman numerals the last two progressions could also be written as: 1) I, IV, V, I and 2) I, IV, iii, I. The fifth degree in the scale is therefore a better choice as the last chord before the ending chord.

Here are some mixed examples with piano chords accompanying and supporting audio examples. 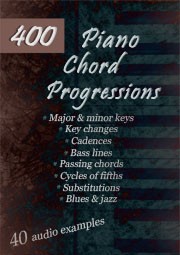 For a broad overhaul of progressions for piano, this ebook contains 400 progressions including 40 audio examples. Instructions for possible chord voicings included.